In Memory of Robert (Bob) Wake

Bob Wake, playing in the 2019 FINA World Masters in Gwangju, South Korea passed away as a result of a heart attack. Blue Thunder and the rest of the USA Water Polo family shares condolences with Dee and the rest of Bob's family.  Tributes and sharing about Bob are below.
Swimming World Story and Tribute by Michael Randazzo 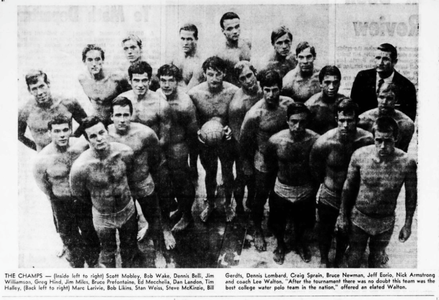 Members of the 1968 San Jose Spartans men's water polo team that won the unofficial national championship. Bob Wake is third from the left in front.
Eulogy by Hillary (Bob's daughter)

Dad was born in Burbank, CA on January 9, 1949 to Robert and Virginia Wake. He grew up in Los Altos, California with his 3 sisters and 1 brother, whom he loved very much. He raced go-karts on the golf course paths, swam and played water polo and golf, and worked at a candy shop part time. He started flying lessons at age 15 and during his Awalt HS days he worked for a mortuary and his job was to fly the plane for people who wanted their ashes scattered at sea. One time his seat mate (a first timer helping out) thought you had to open the bag and literally scatter the ashes, which resulted in ashes flying all throughout the cockpit, covering them and everything else inside. He attended San Jose State on a water polo scholarship, and then played on the 1968 winning water polo team in the national championships. During college he was a live astronaut test dummy for NASA/Ames Research and went through all the experiments of endurance that the astronauts had to do. He joined the Marine Corps flight school and became a Vietnam War Fighter pilot and then was part of the airlift of civilians out of Vietnam at the end of the war. He said the closest he ever came to being in a dog fight was passing a North Vietnamese fighter jet and all he had on his F4 was a camera. When asked if the other plane engaged him at all he admitted that he thought the other guy was just as scared as he was. As a marine stationed in Hawaii he was required to do physical fitness every day, but he hated running. So he left the hangar early in his PT shorts, ran along the runway to where the beach was, body surfed for about an hour, and then jogged back. Everyone thought he could run for forever. As a pilot he was particularly proud to be Carrier Qualified and enjoyed the thrill of taking off and landing on aircraft carriers. As a kid I didn’t really understand how amazing that qualification was (I mean, he’s just my dad; isn’t this normal?), but I started to understand better when I once told some young men who were enlisting about my dad’s abilities and they literally bowed down and worshipped me for being his daughter, begging to be introduced to him. At one point he held the record for most hours in flight in the F4. After leaving active duty he finished his 20 years in the Marine Corps Reserves. He continued to pursue his love of aeronautics by flying for the CIA, Hughes Air West, Flying Tigers, and Fed Ex. He flew the “Ark” for FedEx and transported a whale, pandas, and deer monkeys. Dad has a deep sense of patriotism, honor, service and wasn’t shy about promoting those qualities. He loved history, both in study and travel and I had great fun discussing the finer and lesser known points of history with him. He joined the Church of Jesus Christ of Latter-day Saints during his first year of the military and honored those covenants unashamedly. If you know dad you know his fascination of elephants and perhaps you’ve seen his amazing collection of model airplanes. I wonder now if Dumbo was his favorite Disney movie. He would say his best decision in life was when he married my mom, and I’d have to agree. The moment he saw her he fell in love and teaspoons were never safe again. (Explain teaspoon moments). Though it took several attempts, when he did finally convince her to marry him he hopped in his car in California, drove straight to Tennessee to pick her up, and married her in Mendon, Nevada on his way home. He introduced her to the restored gospel and later baptized her and they were sealed together in the Oakland temple. Together they traveled the world and raised 4 kids, gained 3 amazing in-laws whom he treated like his own, true children, and proudly watched 7 grandkids join the family. If you had the patience he could talk about his family for hours.

Despite all of these accomplishments, when I think of my dad I think of three specific qualities: family/friends, selfless service, and generous love.

My dad had his quirks, like driving down to get the mail on the riding lawnmower, wearing corduroy pants, making “awful waffles” for breakfast, or waiting until the last minute to apply the breaks in traffic (which we always attributed to his aircraft carrier landing skills). There really weren’t many things my dad needed improvement on, but I do recall one that now makes me chuckle a bit. He always had this mentality of “suck it up, buttercup” and struggled to understand why people let their limitations hold them back from achieving anything they wanted (typical marine). Just before his passing he was hiking in Japan with Rob’s family and hurt his knee. He had to use crutches and had only just begun walking on it tenderly before the water polo games began. He shared in a FB post about how he finally understood the limitations of a broken body and would from now on have more compassion for others in these types of situations. I thought to myself, “Wow, dad, I guess you’ve learned it all.” But, as in every calling of life, once we learn what we need to know we are released from that calling and move on to another. Dad had done so much good and had learned everything he needed to in this life and he could only progress if he moved on.

There are only two comforting things about his passing: 1) knowing that someday in the future we’ll be reunited again, and 2) until then I can witness these top notch qualities continue on in my siblings, my nieces and nephews, and in my own children.

Bob Wake wasn’t just a former NASA employee, FedEx pilot, beekeeper, or owner of the Rose and Crown in Hawaii. He wasn’t just a home improvement specialist, marine, temple worker, water polo player, golfer, world traveler, or Vietnam Veteran. He was so much more than that. He took the most honorable callings in life and magnified them to the fullest- he was an exemplary husband, father, brother, son, friend. He was the kind of person who would see that something needed to get done and make sure it got done. He selflessly worked to help others through this crazy path we call life, serving more and better than anyone else I know, without complaint, without seeking reward, and without waiting to be asked. My brother, Brad, put it best when he said “the best way we could ever honor dad‘s memory is to be as faithful as we can to this gospel of Jesus Christ that he brought us all into.” It would be dad’s greatest joy to be able to greet us all once again in the eternities, so let’s not let him down, Capeesh?