Blue Thunder 60+ Team A captured 1st Place.  It has been 15 years since a team in this age division won the Division!
Our Club earned two 3rd Place finishes as well.  Scroll down for more details

Blue Thunder entered a total of six teams across 4 age divisions. Our Club comprised 12.5% of the total number of Men’s Teams entered in this year’s competition.

We might have lost some games, but we WON great FRIENDS”.  Many of you might already know that we lost a big portion of our team right before the tourney.  Those who had the “LOVE of THE GAME” in their hearts helped us:  some traveled great distances to join us, while others took double rosters to help us form a team. In the end, it was a great weekend of WATER POLO, and new GREAT FRIENDS to build a team with.

Our team was a mix of former and current BT players and a few people I have played with over the years. The biggest get for me was my former college teammate, Mark Stevenson. Mark is a former All-American from UC Irvine and he and I played together for a year in college. In my book, Mark is the best player I've ever played with or against and I've played with and against some of the best in the world over the years. Mark was huge for us over the weekend and a big reason we did so well. I played in goal and had one of the best tournaments of my master’s career, mainly because I knew I was going to play with Mark - and I got in great shape ahead of time.

Balancing out our team was Rob Swain, a strong lefty whom I played with in Scottsdale over the years, Apollo, Wes, Guy, Paul, Chris, Greg (also a former college teammate of mine), Matt with Jon, Scott, and Mike from last year's team.

The best part of this weekend was playing with this great group of men and playing highly competitive polo in every game leading to a 3rd place finish!

Our 3rd place game was one for the ages. Sunset, who was stacked with great players and depth was our opponent and we jumped out to a 2-0 lead. We fell behind early in the 4th quarter by 2 goals and came back to win 9-7. The real story was a team story. We had timely defense, great saves, and a dominating performance by Mark. We really came together in that last game and one of my best memories is blocking their last shot and telling the team to spread out to run the clock out. Getting our medals was pretty sweet too. 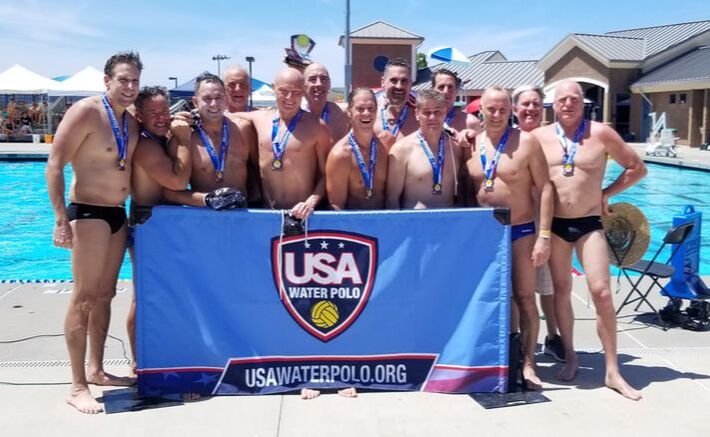 Interesting story regarding Oriel our 60’s goalie.  Many of you saw him play and he is with no hesitation our MVP.  No one else was close.

I took Oriel and his wife and Peter and his wife to dinner after the tournament was finished. Oriel told me a story about a brawl with the US team after a game in Cuba in the earl 1980’s.  The goalie for the US team at the time was the SB goalie – Steve (Harpo) Hammon.  After a very tough game which the US won 2-1, apparently in the shared locker room, Oriel threw the first punch and it was to knock down Steve.  Oriel’s two brothers were also involved.  The Cuban doctor locked the door to the locker rooms from the inside and told the police that it was “water polo” business and to stay out of it.  Anyway Steve and Oriel have not seen each other since and had a laugh about it on the deck (SB had a guy who spoke good Spanish to translate).  The finished with a hug 40 years later.  Pretty cool story.

Best Team Spirit – with no hesitation – Jim Harmon our other Goalie.  We ended up with only two subs including our backup goalie.  I talked to Jim before the tournament and asked him if he would be willing to play some field.  He said sure.  Oriel played the entire first game with Calgary and Jim played the entire second game with our BT B team.  Oriel played field in the second game.  Oriel played vs SB and after that game Jim comes up to me and says; “we need to put this away with an exclamation point.  Play Oriel and I will play field.”  A lot of goalies would have been complaining about playing time.  Jim Harmon was all about the team.  It does not get better on the attitude chart.  As a last note, Jim scored from the 3 post on a 6-5.  Perfect pass to him and he put it away.  It was the very first goal he has ever scored in an official game!

Game Vs Santa Barbara
We scored in the first 15 seconds and went out to a 3-0 lead in the first quarter.  I think SB was a bit shocked at fast start and just how good Oriel was in the goal.  The team played great team defense dropping on 2M pressing everywhere else. We had quite a number of successful drives and deluxe passes on time and on target to our drivers.  Larry Atnip was exceptional all tournament long.  Cam McBee was a big contributor in inside attacks.  Svein Sandoy won most of our sprints giving us 3-4 additional possessions every game.  Cam, Svein and Rob Barton crushed our opposing hole sets on a regular basis.  And with only two subs – one of them being one of our goalies we out swam all of our opponents.  All of the players showed up in fantastic shape.  Tim Freeman was solid all tournament always getting back on defense as usual.  Jeff put his share of goals in from his patented lefty spot.  The entire team played exceptional team defense that really frustrated our opponents creating a lot of fast break opportunities.  I think that we forced 5-6 clock expirations during the SB game and more in our other contests.
Thanks to the entire squad for a truly outstanding tournament.

Bill Rutsch is always solid at both ends of the tank and is always a heads up player that can be counted on to take on the hole defense as well as offense.  He can even shut down an odd man rush.  Rich T played really well and is a another solid player who can be counted on to provide solid defense and offense. Bill included my name in his assessment and I played well, blocking many shots (when they were not one on nothing) and trying to lead from the goal. I echo Bill’s comment that having Jody, Jim, Mick and Dudley help us out was huge and really appreciated.

Most Valuable Player (title says it all) I would say Bill Rutsch.

Best Team Player (player who may not be the top scorer yet made a significant contribution through selfless offensive and defensive play)
Bill’s response was “Ken” which I agree with, but I would also say that Rich T earns this distinction too.
Best Team Spirit (player who made the weekend fun): Bill Trowbaugh had a good attitude

Getting wiped out by the Silver Surfers was the toughest, but the best, most competitive game was with Calgary.  The Lobos game was a forfeit but they agreed to play 5 on five and we actually played quite well.  I especially am pleased that they went 0 for 3 on penalty shots and that there were 20 saves made in the game.
65+ A Team: Coordinator - Place 3rd ; Mick Barry
Bill Drulias, Jody Inglefield, Pedro Marsan, Steve Trow, Bob Likins, Ron Koehler, Gabor Zinner, Roger Smith, Ed Purcell, Richard Parmer

This summary is for both 65+ Teams:
The 65 B team MVP is John Collins  and the 65 A is a tie between both our goalies Bill D and Rick Parmer.

Rick gave a great performance in goal but actually added to that when not in goal. He played field for the 1st time in years.  He gave valuable rest to Jody and Mick who played a lot of minutes in all the 65 and 60 games this weekend {other than the conflict game which was a shame they were at same time 30+min apart.)  Jody and Jim left the bronze game at end of 1st quarter to help 60 not forfeit a second while Dudley and I stayed so we had subs on the 65 teams..  We did have both A and B pose for the official trophy picture so all went well this weekend.

I would nominate both the A and B teams as whole as the spirit award winners as we supported each other during the weekend in the pool and on the deck.

Best contributor Team B was Doc for playing hole set for the team, a position he has never really played before.
For Team A, Jody for his work in the set.

Toughest game was all of them for both teams we played hard   OMB was one that if missing players were able to play (USAWP scheduling made it difficult for DR players to contribute),  their contributions would have the difference   We were ahead 3-1 late 1st Q but then OMB played all their guns rest of way and lost 12-5 mostly due to defense not coming back.